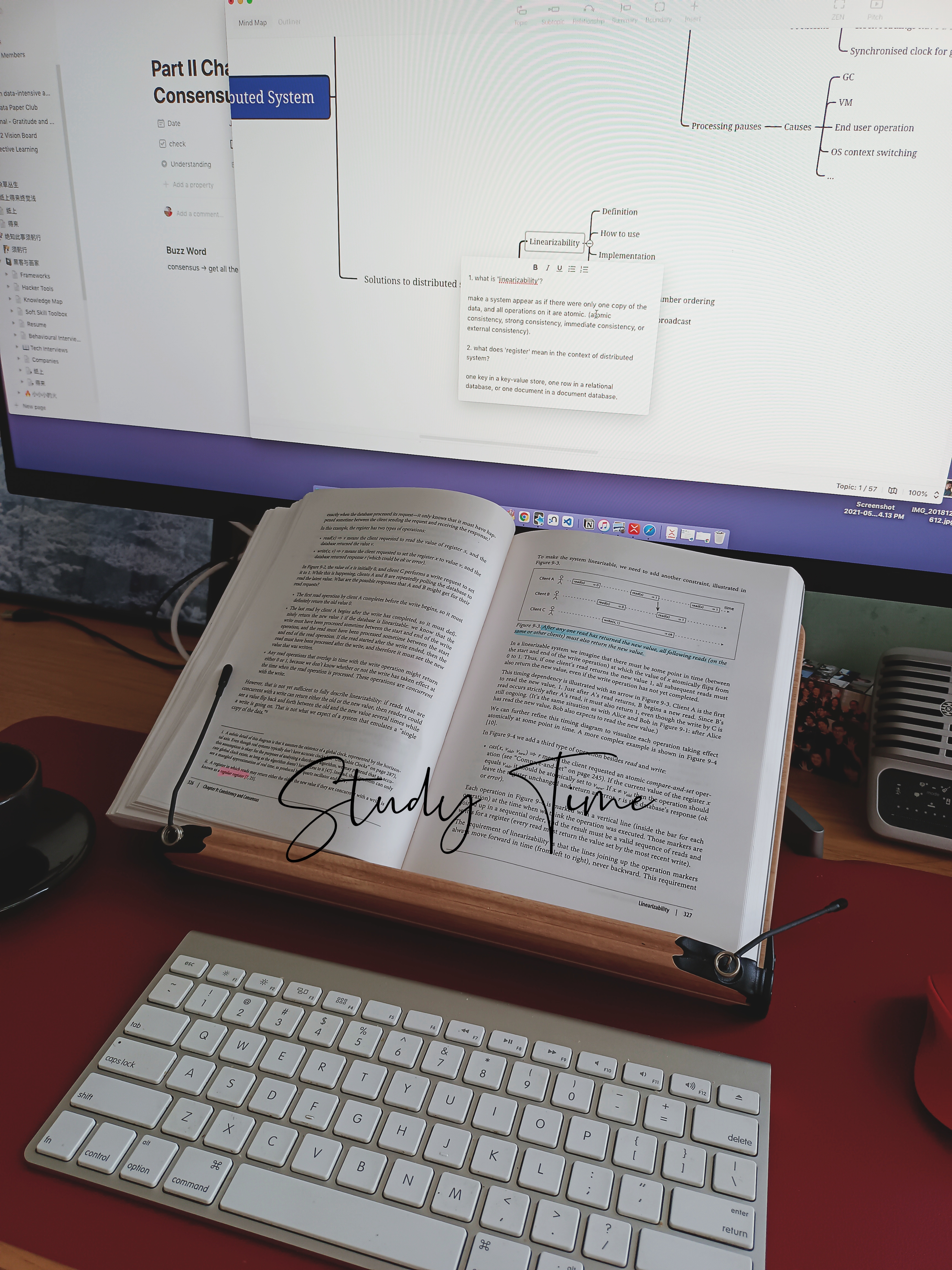 Services communicate to each other by protocols (pre-defined interfaces and data models). As application developers, we are very often making API design choices by choosing between HTTP or gPRC, or REST vs RPC vs GraphQL, or Web socket vs HTTP etc. The definitions of these terms are sometimes misunderstood a lot (at least by me for a long time). These terms are actually not mutual-exclusive.

This chapter provides some fundamental knowledge on data encoding (serialisation): different mechanisms of turning data structures into bytes for for communicating over the network or storing on disk. The focus is on the compatibility properties of the different encoding strategies: how easily the backward and forward compatibility can each solution provide. At the later part of the chapter, how data encoding plays a role in the three common dataflow in application design namely data store, sync API communication and async message queue is discussed. Understanding the underlie mechanism of data encoding helps us to make better tech decisions when designing and implementing application softwares.

1. Why we need to encode the data (translation between the in-memory data representation to a byte sequence that is sent over the network or sent to a file)?

The data stored in memory (normally as list, object, hash tables, trees) is designed for efficient access by the CPU. While the data transferred through the network or written to a file is in a format of self-contained sequence of bytes, which is quite different from the data structure used in memory.

3. What are the pros and cons of textual format encoding method? (e.g. xml, json, csv)

4. What are the benefits of binary encoding?

5. How do Thrift and Protocol Buffers handle schema changes while keeping backward and forward compatibility?

The field tag is used to refer to each field and it is never changed. There will be new fields with new field tags added. To maintain the forward compatibility, the old code will simply ignore the unrecognized field tag. For backward compatibility, the new code can always read old data because the tag numbers still have the same meaning. The only detail is that you cannot make the new field as required, as the old code will not have written the new field you added.

6. What is the benefit of ‘repeat’ field type in Protocol Buffers?

The encoding of ‘repeat’ field type says that the same field tag simply appears multiple times in the record. This has the nice effect that it is okay to change an optional field into a repeated field. New code reading old data sees a list with zero or one elements while old code reading new data sees only the last element of the list.

7. What are the three ways to communicate the writer’s schema to the reader when using Avro encoding?

8. How does Avro maintain the forward and backward compatibility?

Avro maintains two set of schema - writer’s schema and reader’s schema. The schema resolution logic will check the compatibility and resolve the difference of the two. Adding or removing fields that has default value, we can maintain the compatibility.

10. What is data outlives code?

Data in the database was written some time ago and might become incompatible with the newest version of code that reads and writes data.

11. What can schema evolution bring to the database dataflow?

Schema evolution allows the entire database to appear as if it was encoded with a single schema, even though the underlying storage may contain records encoded with various historical versions of the schema

Understand the 4 encoding algorithms with an example

MessagePack has no schema, it is a binary encoding for JSON. The schema (keys) needs to be encoded in the message. So, the binary encoding is 66 bytes for this example, which is not much size reduction achieved here (original json is 81 bytes). It is not clear whether such a small space reduction is worth the loss of human-readability. 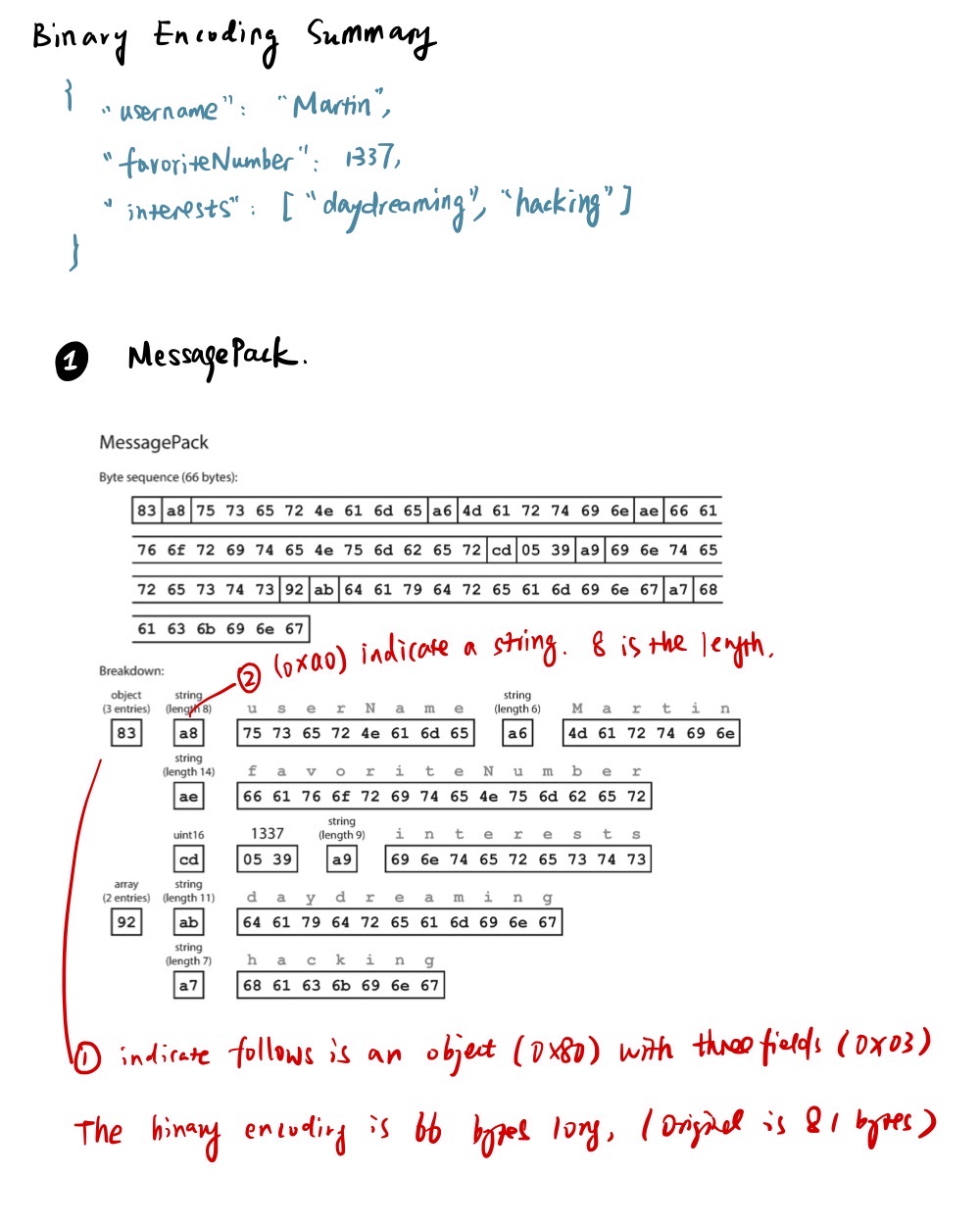 Thrift and protocol buffers are similar in the sense that schema is defined and fixed with tag number. With the re-defined schema, the message size is significant reduced since only the schema tag is required in the message. An obvious difference between thrift and protocol buffers is how the array type data is defined: thrift support list data type while protocol buffers use repeated marker to indicate that a field can be a list: this has the nice effect that it’s okay to change an optional field into a repeated field. New code reading old data sees a list with zero or one elements; old code reading new data sees only the last element of the list. 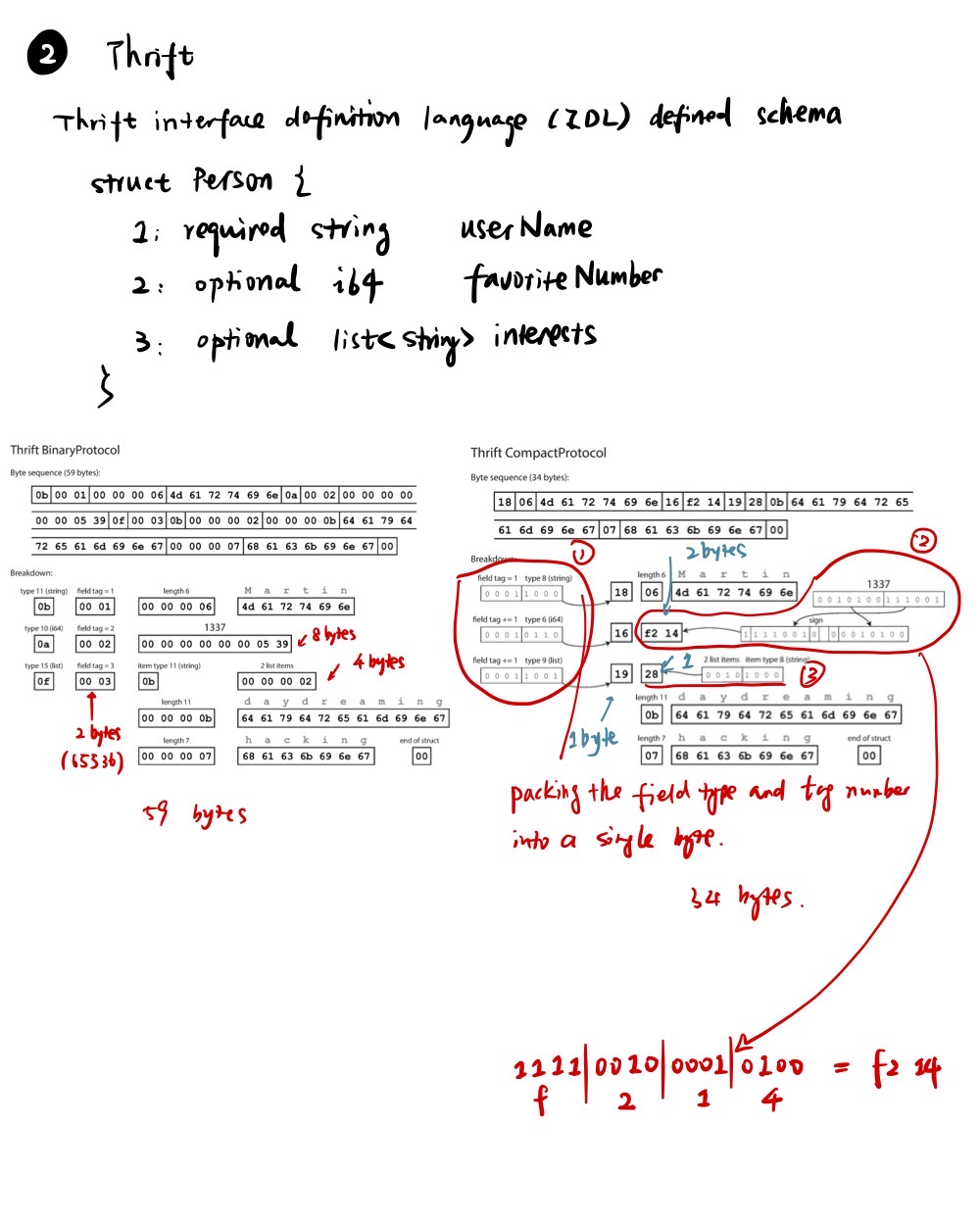 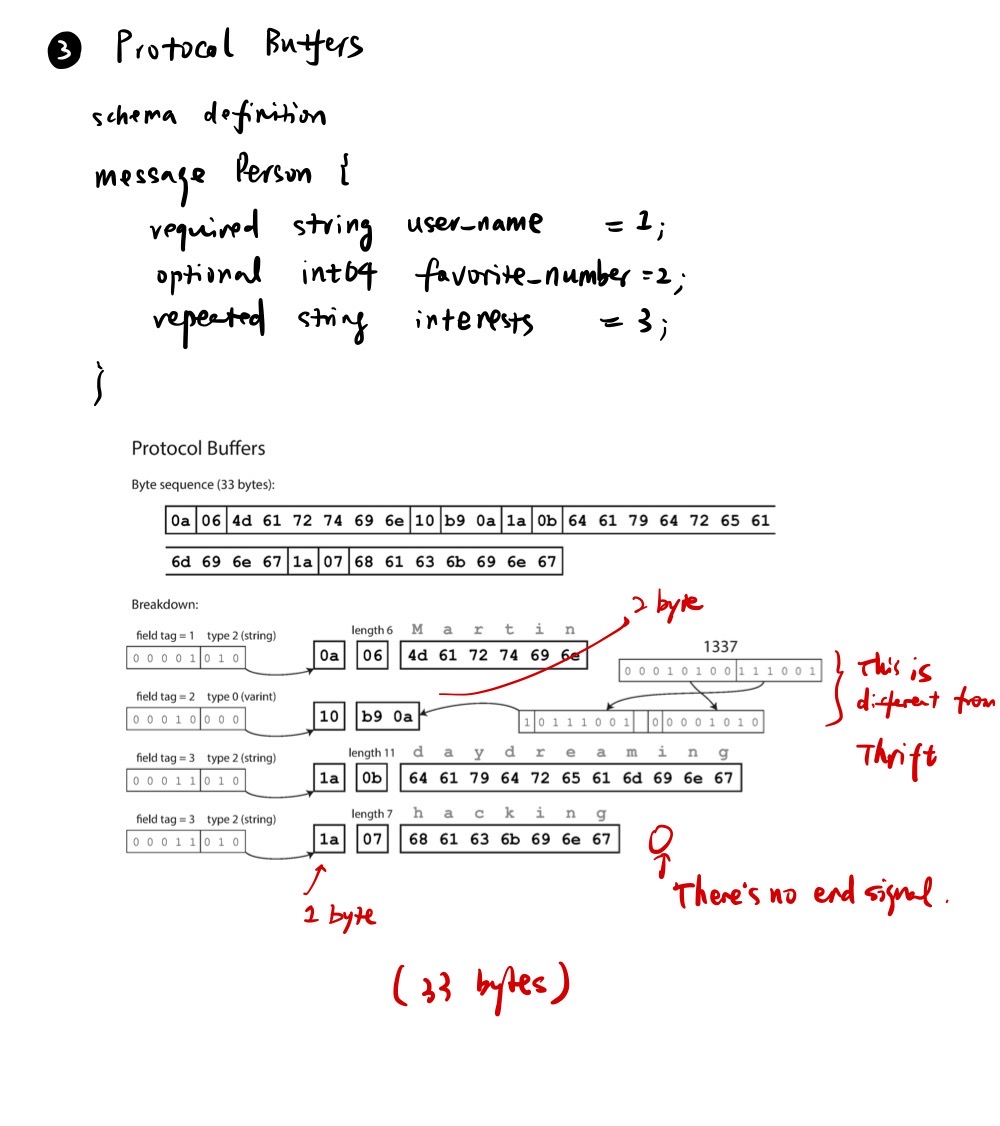 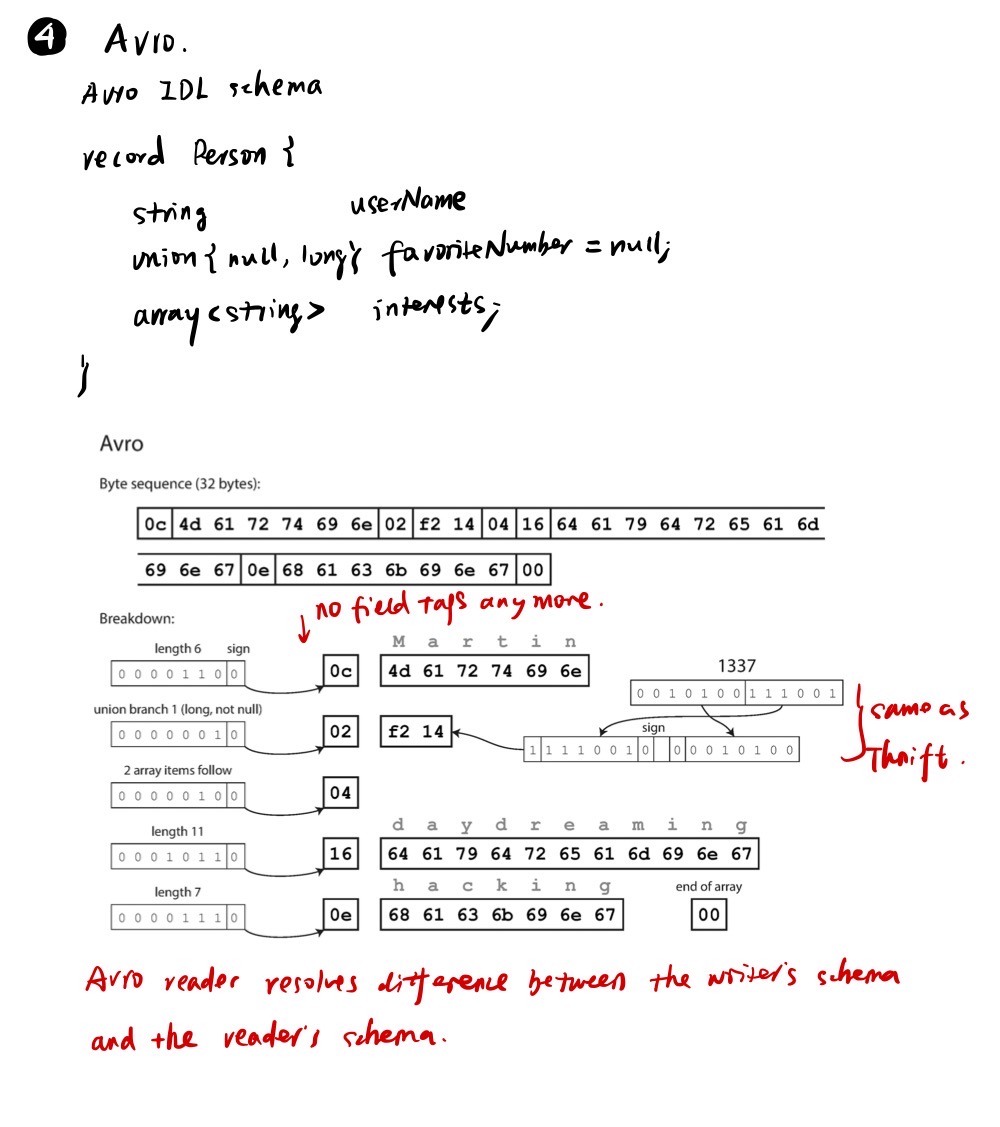 A better understanding of the concepts:

RPC: first we shall differentiate the definition of RPC used in different context. RPC (remote procedure calls), the idea has been around since 1970s. The RPC model tries to make a request to a remote network service look the same as calling a function or method in your programming language, within the same process. Nowadays, we use RPC often to describe:

When we compare REST and RPC, we could be comparing HTTP API design pattern - use RESTful and RPC-style design pattern (another pattern faded out is SOAP). Or we could be evaluating tech decision on protocols, whether we should use HTTP (json) or RPC (gRPC or other frameworks build on top of the protocols).

Explained above, we are comparing the json encoding and protocol buffers encoding

GraphQL is an application layer server-side technology that is used for executing queries with existing data. It is deployed over HTTP using a single endpoint that provides the full capabilities of the exposed service. It promotes a difference API design philosophy from the REST, it requires strong typed schema definition and supports schema stitching.

WebSocket is the default choice for the online messaging service. We could just skip the discussion of HTTP vs WebSocket in supporting peer-to-peer messaging and opt for WebSocket directly. It is not some fancy technology, as Keith Adams said in his slack presentation, it could be some 40 lines of java code wrapping a standard WebSocket library with a for loop over the people that are connected.